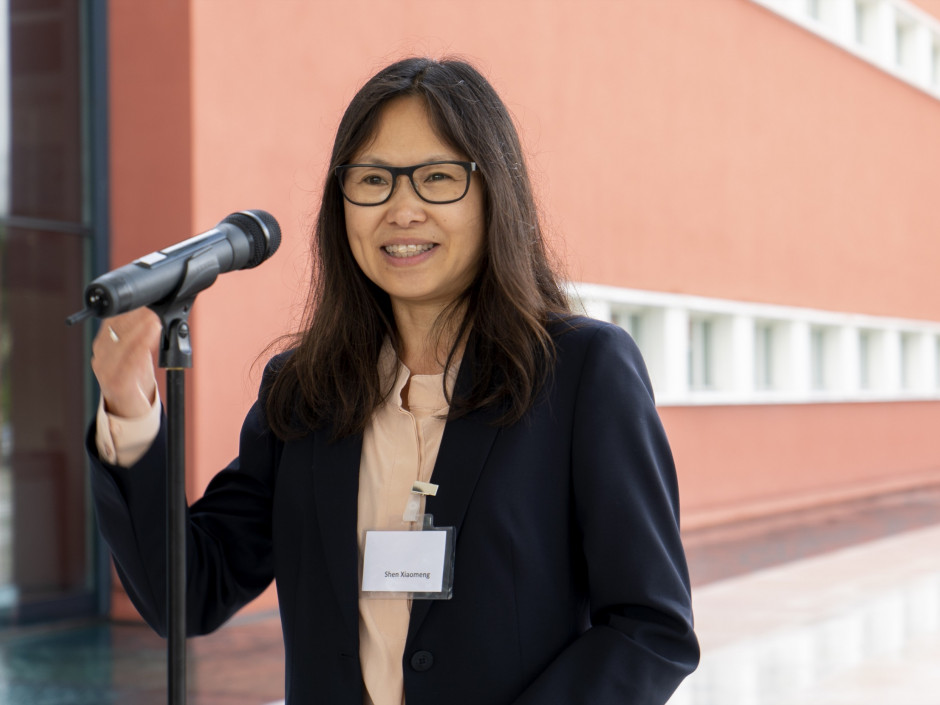 Shen Xiaomeng, newly appointed UNU Vice-Rector in Europe and Director of the UNU Institute for Environment and Human Security, on climate change, natural hazards versus man-made disasters, environmentally induced migration and the necessity of transforming the course of human purpose and belief.

This early in your role, what are the pressing issues that you are planning to confront?

Shen Xiaomeng: The institute has been doing very solid research on risks in terms of natural hazards leading to disasters, or rather manmade disasters and climate change as well as environmentally induced migration. The next step would be really to see how you can put all these different areas together, like puzzle pieces. I also have some new ideas, and, because of the Corona crisis, I have realised that now is the time to really think differently. Over the past years we’ve been focusing on risk research, looking at vulnerabilities, exposure and coping capacities, but it’s simply not enough. These are typically the symptoms, especially visible in the Global South. But most of the root causes arise in the Global North.
It’s time now to look at Global North, at consumption patterns, lifestyle, resource and energy utilisation.

It’s hard to change, especially models that are so ingrained…

Shen Xiaomeng: We have the knowledge, technology and wealth to tackle all the World’s problems, but we aren’t doing it. The reason is that we’ve been thinking in the same pattern and speaking the same dominant language, which focuses on economic growth, thinking that this equals progress, but that’s not the truth. It’s only a matter of redistribution, addressing inequality for instance. In the meantime, we also need to tackle the root causes of the whole risk and vulnerability domain. Human wellbeing exists beyond GDP. Wellbeing doesn’t mean that you are rich. You can be satisfied if you can meet basic needs, like access to clean water or health care. We need to look at the world from a different angle and see how we can develop a second narrative at least, which becomes as strong as the GDP language. The question is: how can we create much more wellbeing, without the exponential economic growth? Scientifically speaking, we’ve been doing so much excellent research but there’s a lot of potential to create more visibility. We need to translate these authentic results into languages which can be understood by the common public and policy makers. UNU was created to serve as a think tank for the UN system and for national governments, it’s a unique selling point which differentiates us from traditional academic institutions, by translating policy-relevant research into appropriate applications that are serving local communities at the grass-root level.

One of your research areas is environmentally induced migration. Why and how do populations move and what are your predictions for future movements?

Shen Xiaomeng: At UNU-EHS, our scientific opinion is that there are no reliable estimates of the number of people on the move today or in the future as a result of environmental factors. The reason for this is twofold: a difficulty untangling the reasons for migration and a lack of official figures on within country movement. Often, places that experience climate stressors are also affected by conflict situations, political instability, low levels of economic development and human rights abuses. This makes it difficult to establish a direct causal link between the movement of people and the environment. The environment, including climate change impacts, is usually one of multiple factors involved in a person’s decision to leave their home. Furthermore, a lot of movement that is more directly attributable to climate stressors is within a country, from rural to urban areas and not across international borders. This movement is often not officially documented. I also believe that we need to shift attention from ‘climate migration’ to ‘climate mobilities’, as this captures the movement of people in more neutral and analytical terms – neither making assumptions that mobility is unidirectional or monocausal nor good or bad.

The question is: how can we create much more wellbeing, without the exponential economic growth.

Shen Xiaomeng: It’s interesting to look at them together because everything is connected, circular  economy is about to reusing things. If you can increase resource availability, through bio- and circular  economy, people will have more access to resources and do not need to move somewhere else to secure their own livelihood. That’s the very direct correlation, but neither are enough. There are different theories in this field, some of the theories say we have enough of everything, we can basically continue with our  lifestyle and everything will be alright. I doubt this very much. Our planet will survive and thrive without us, but, on the contrary, humankind can’t survive without the planet.

You came to Bozen/Bolzano today to raise the UN flag, cementing the collaboration between Eurac  Research and UNU - what roles do mountains have in enabling a sustainable future?

Shen Xiaomeng: Mountains cannot be seen as separate units from the rest of the world, they make up 1/4  of the Earth’s surface. Anything that happens in the mountains has an impact on the lowlands as well. Let’s take glacier melting as a global phenomenon that can be observed in mountain areas all over the world as a result of increasing temperatures within the lower atmosphere, often leading to the establishment of new glacial lakes. With the increasing volume of the water body within these lakes, there is also a growing risk of so-called glacial lake outburst floods (GLOF), especially in the Hindu Kush-Himalaya region and the Andes of Latin America. This is a type of massive outburst flood that happens when the dam of a glacial lake collapses, for instance triggered by high water pressure or seismic events like earthquakes, again leading to mass movements such as landslides, rockfalls or avalanches. All these events might be extremely dangerous for local communities living downstream. And that’s only a short-term impact; in the midand long-term perspective, any changes in the water cycle in mountains may also lead to serious droughts, in turn affecting agriculture and food security in surrounding lowland areas. Mountain systems are very connected with lowland ecosystems; they make up a huge part of Earth’s entire ecosystem.  Mountains play a huge role and are a treasure of biodiversity for humankind. We tend to value things which have price tags on them, but as a natural resource, mountains add so much to our sense of  wellbeing, their healing power doesn’t have a price tag and people tend to forget about that by  exaggerating tourism. That comes back to the topic of having to change our mindsets, to value the things which create more well-being versus those that create more material gains.

How does one embark on the massive task of changing the entire population’s belief system?

Shen Xiaomeng: It is entirely possible. No one expected the Corona virus, we never imagined that we could work from home offices like we’ve been doing, but we’ve been doing it for months. The technology has been there for decades, we didn’t use it before because it wasn’t necessary. People need to realise it is necessary to take radical measures to counteract climate change. If we always think the same way, that fighting against climate change impact is such a humongous task, no one will do anything. Just two weeks ago, I was at the UNFCCC (United Nations Framework Convention on Climate Change). They have this new approach, which is called Resilience Frontiers, where they bring influential thought leaders of the entire world together, to think differently. It was very inspiring - we all have to start think differently, if you think the same, how can you make a difference? Or take the example of Fridays for Future, the younger generation is clearly showing us an inspiring way to take action at the individual level.

Every cloud has a silver lining, people don’t realise that the pandemic has shown us that habits and institutionalised ways of living and thinking can be overturned.

Shen Xiaomeng: We are capable of change, we just need to want it. If you go to town you see  advertisements everywhere and if you watch TV, which I don’t, you are bombarded by advertisements. Open a magazine, a paper, look at news sites and social media – it’s the same, every single day. But do you see any advertisements about sustainability every day? Not necessarily, and definitely not with that
kind of intensity. We know the impacts of advertising so why can’t we just turn it around?

Shen Xiaomeng was appointed UNU Vice-Rector in Europe and Director of the UNU Institute for Environment and Human Security on 1 August 2020. Her first official function in the role brought her to Bozen/Bolzano to participate in the UN flag hoisting ceremony at the Eurac Research headquarters.
The formal event marked Eurac Research’s position as a new UN duty station and cemented the longstanding research partnership in the fields of climate risks, sustainable development and civil security research in mountain areas between the Bozen/Bolzano research centre and the United Nations University. 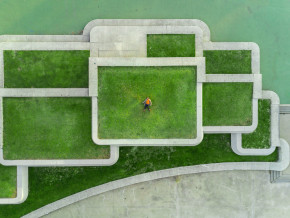 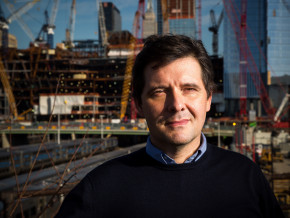 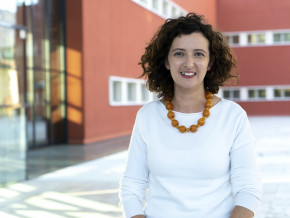